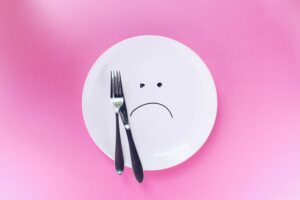 The common image of food addicts is that they are overweight. A majority of those for whom the disease of food addiction has progressed certainly are obese – and/or morbidly (i.e., life threateningly) obese. Yet there are many food addicts who are a normal weight. Some of these healthy looking food addicts are bulimic. Others just have a metabolic system that keeps them appearing “normal,” even when they are bingeing abnormally. There is also a small but important group of food addicts who are dangerously thin. Most of these are food addicted and anorexic. Even some overly thin folks who are unable or unwilling to eat enough to come up to a healthy weight are also chemically dependent on food and have a history of progressive food addiction which much be addressed before they can have a full, healing long-term recovery.

How can an anorexic know if they are food addicted?

One obvious sign of food addiction is a history of out of control eating – usually bingeing, sometimes purging and almost always becoming overweight by traditional medical standards.
Restricting food begins as a way of compensating for a binge. Then regular fasting becomes a strategy for periodic weight loss after gaining by overeating. It is only as the anorexia progresses that such a person stays thin – and then becomes unhealthily thin – and begins to “look like an anorexic.”

A second indication that an anorexic is also chemically dependent on food is a desire to eat a lot more than they are eating – especially sweets and “junk foods” – as well as the strong desire to control their weight and body size by undereating. If there is a history of craving sugar, flour, and fat, this is a reason to consider the possibility of food addiction as a second diagnosis. These cravings can be current, but do not have to be.

All anorexics obsess about their bodies and greatly fear getting fat. It is less known that many anorexics also obsess about food. This often manifests as calorie counting, a list – often quite long – of “bad food” and a preoccupation with eating in a way that they can control what they do – and more importantly, do not – put in their mouths. What is less common is a constant or frequent obsession about wanting to eat sweets, snack foods or just “more” of any food. Especially if this sometimes gets so strong that it seems like “I just have to have it,” there is good reason to assume this person is food addicted as well as anorexic.

Of course, anorexics should use the whole range of diagnostic indicators of food addiction to ascertain if they are chemically dependent on food. There are the traditional indicators of food addiction denial: lying to others and themselves about what they eat, breaking their own moral code – e.g. stealing food or stealing to get food, seeing their powerlessness over food progress over time, feeling numb or high or drugged after eating, experiencing symptoms of detoxification – e.g. anxiety, depression, sleepiness, inability to sleep – when eliminating a binge food altogether. Few food addicts have all of these symptoms; at least they are not able to see them in their own experience at first. So, just one or two obvious signs of food addiction are enough to at least investigate further.

Anorexia is traditionally understood as a psycho-social disorder. It is now also being treated effectively as an addictive disease. (See text at Anorexics and Bulimics Anonymous). In this view of anorexia, the drug which becomes addictive isthe illusion of control. Whether being treated as a primarily psychological problem or a more complex addictive illness, the anorexic needs to learn to counter irrational thinking about body image and food and address unresolved trauma from the past. Many – if not most – anorexics that are treated in either modality are not food addicted.

Those who are chemically dependent on food can best be seen as having more than one illness. Those who are addicted need to abstain from their food drug(s) of choice as well as become willing and able to eat more food and often a wider variety of foods. If they have a history of bingeing on sugar, it is questionable for them to try to learn to eat sweets in moderation.

On the other hand, many anorexic food addicts who were addicted to fat, go to the extreme of not eating anything with fat in it at all. Since everyone needs some fat in their diet to enable them to digest other foods, these food addicted anorexics do need to learn to eat fat in moderation. The recovery of those with both food addiction and anorexia can be quite complicated and difficult.

In general, it is our experience that people with advanced anorexia and food addiction need more time and support in recovery than those who are only chemically dependent on food. Anorexia has its own denial, and the food addicted anorexic can have special problemS breaking food addictive denial. The illusion of control in anorexia – and often bulimia – makes it doubly difficult to accept real powerlessness over food. There are also many cases of people who were anorexic and bulimic in their youth and then became compulsive overeaters. If they are food addicted, they often need a great deal of help to break through their biochemical food dependent denial.

All of these fellowships tend to suggest food plans which include all food in moderation, though ABA very specifically supports those who abstain from specific foods, i.e., food addicts.

This is the key to those who are dually diagnosed with anorexia and food addiction: they need to surrender control of both their obsession with not “getting fat” and their specific food drugs. They need to learn to not restrict and to not overeat. They need to eliminate and detoxify from food(s) upon which they have become chemically dependent and deal with unwanted feelings and irrational thoughts that lead them to starve themselves. Moreover, as physical recovery begins, there are always deeper emotional and spiritual issues which, if not dealt with thoroughly, can lead to relapse down the line.

Food addicts come to SHiFT because they are aware of their food addiction and know SHiFT’s history of support for food dependency recovery. Some are often surprised when they discover they are also anorexic. It is hard for this group to understand that all anorexics are not dangerously thin. In fact, we find that there is at least a little bit of anorexia under most progressed food addicts. It is the part of their illness in which they have spent so much time trying to control their eating. It is the part of their recovery which stays rigid and perfectionistic long after the first year of abstinence. The lack of joy and true happiness in this “controlled physical recovery” leads many to relapse after a few years.

More difficult is the anorexic food addict who is dominated by the restrictive side of their eating disorder. For some it takes much longer than seven days – the length of the SHiFT residential Acorn Primary Intensive© – to be able eat a healthy amount and mix of food. If they are willing to try, we will often accept them and support them as long as they do not need hospitalization or direct medical supervision.

One suggestion we have for those who think they might fit into this category is to read the first 137 pages of Anorexics and Bulimics Anonymous; if you are willing to try this approach to dealing with your anorexia and abstain from your likely addictive foods, the Primary Intensive© will probably be helpful.